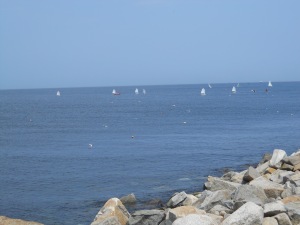 My daughter, my first born, leaves for college this month, two states and three hours away from home. She’s ready. I’m ready, I think. I say “think” because I’ve had eighteen years to prepare for this milestone. But when I think about it, I get anxious.

I recall watching the school bus going by our house when she was two months old and thinking to myself, “She is not going a noisy, germ-infested school bus.” Five year later: new shoes on and a Veggie Tales back pack loaded with her lunch and school supplies, we headed for the bus stop. I had the video camera ready as the school bus drove up to record this milestone, as I had so many others since she was born. We barely said our goodbyes, when the school bus door opened and she eagerly bounded up the steps to take her place in the front seat. Her little brother and I watched as the school bus drove out of sight. I had prepared myself to go directly to the grocery store so that I would not have to go back inside the house, but alas, I forgot my pocketbook in the first- day- of –school excitement.

After I wiped away my tears, my son and I went to the grocery store… and then the mall. I celebrated my first born child’s first day of school by shopping. The second child was easier, not as emotional the second time around.
And so it would go…moving up from elementary school to middle school…moving up from middle school to high school…graduating high school …and all the many other achievements in-between.

I’ve been learning to let go for the last eighteen years: Watching her grow from an infant to a curious toddler to a free spirited girl and to the young woman she is now; when she learned to walk and no longer needed me to carry her, learning to ride a bike, and finally gaining her independence when she obtained her driver’s license and could drive herself to school, her friends’ houses and to the mall; the first sleepover with friends (and all the subsequent sleepovers) and when she traveled to France and Spain with her school mates.

It’s hard to let go – to let her be…herself. I want to hold on to her longer – to be the little girl who looked at me with a Cheshire cat smile when she was up to something (and she still does). Or in the morning when I’d wake up and find her sleeping on the floor next to me with her pillow and blanket – a safer place to sleep when a nightmare would wake her up. On the other hand, I know I have to let go and allow her to be the lovely young woman she is. It’s time for her next adventure.

This is her journey. She chose her path. She chose me as her mom for this life’s journey. She is mine to borrow. But her life is her own. It always has been. We were brought together to love and learn lessons. I feel that in this life, she is teaching me to let go.

But, I’ll be calling all archangels and angels to watch over her as I drive home the day I drop her off at college. Maybe I’ll drive to the mall first…then go home.

Author of "Sweet Dreams" and "Last Night I Dreamt.... a Guide to Dreams and Dream Recall" View all posts by Leslie Sheridan