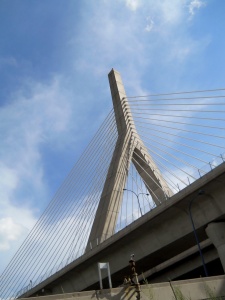 I remember the days when you went on a vacation road trip and you would need a map. A Rand McNally paper map that was folded accordion style and then folded over, like a small memo note book. Growing up, my family had one for New York State that my dad bought at the gas station.  Later on whenever I went anywhere, I bought a map before I went on vacation. I had maps for New York, New Jersey, and Massachusetts. Some trips only required that I stay on the interstate and use the green directional signs and I had no problem getting to my destination. Times changed and we started relying on technology to help us find our way. Paper road maps, for the most part, although they do have a few in some gas station food marts and convenience stores,  have ceased to exist and have been replaced with  MapQuest, Google maps, etc.

And so, on vacation in the Boston area last month, we got lost. To be specific we were driving back from Boston. My daughter and I had had a wonderful day shopping in Quincy Market Place  at Fanueil Hall.  We had been in the area a few times before, and we’ve had several trips to the north of Boston in Glouchester  and Rockport.  But, I wasn’t as experienced driving in the Boston area. My daughter had put our destination into her Galaxy S4, giving the computer the directions we needed to get from Boston to our hotel a half hour outside of Boston, in Wakefield, Massachusetts. Option one: Get on I-90 to I-95 North until our exit. Cut and dry. Option two: Take Route 1 and shave off eleven minutes, saving us time and gas. Too good to be true? Yes.

We took Option two. The robot lady in my daughter’s Galaxy S4 mobile device, sent us on the scenic route of eastern Middlesex county. We must have driven up and down Walnut Street a dozen times. The robot lady re-directed and re-directed us. We did see the small road sign for I-95, but where was I-95? Where was the road that led to the ramp? Ninety minutes before we had begun a thirty minute ride back to our hotel! My head was aching and we were exhausted. Then the inevitable happened. Her phone died. My cell phone, an older Samsung model,  not set up for internet, was still very much alive. And this may have been what saved us. I need to say that the few people who helped us with directions were very polite and understanding, even in the age of the internet. One person stands out. Was it fate? And if so, why?

After what seemed like our fiftieth time cruising up and down Walnut Street, we gave up and  drove until we found a gas station. I got out of the car  and walked into the gas station to ask for directions. The old fashioned way – you know –  what people did before technology changed our way of life. There were two people in line at the gas mart counter.

He hesitated a little and started to speak up  when the woman in front of him who was at the counter said, “I know. You have to…  Hold on, let me finish here.” The man behind the counter gave her the receipt and change for her purchases which she put into her tiger print clutch wallet. She closed her wallet and we walked outside the store while she gave me directions. She spoke well and had a great sense of direction. She lived in the area and knew it well, I could tell. She told me to go out here, turn there, go two lights, turn right, go around the lake, then come to a stop, go onto Walnut Street (where we saw the sign for I-95!) and then turn somewhere and you see this store and the ramp for I-95. Okay, she didn’t say it exactly this way, but her directions were clear. Except that at this point my head wasn’t absorbing any more information. I nodded okay, thanked her and jumped back into the car where my daughter was waiting.

I went to start the car and realized I didn’t recall anything this young woman told me. I was mentally exhausted. Suddenly, there was a knock on my door window. It was her. I rolled down my window.

“Would you like me to text you the directions?”  she asked.

“That would be great! Thank you!” I replied, relieved.

What followed was better than the on-line directions. She sent me a long text of perfect directions. I looked them over and handed my phone over to my daughter. Every single direction was spot on. Can a human being communicate directions that perfectly? Was it divine intervention? We were back at our hotel in less than twenty minutes. I sent her a text to let her know that we arrived and to thank her. I was grateful.

I believe in signs. I believe that our angels and spirit guides are around us, helping us throughout our day and our lives. In little ways and not so little ways they rescue us from whatever trouble we’re in. We can recognize that if we are aware. There are people who come in to our lives for long and short periods of time to assist us during this journey. Some for just an interlude – like the woman who rescued me that warm July day.  I don’t believe she was an angel,  but I believe she sent  by an angel. We were both in the right place at the right time. It was fate.

After we rested for a bit in the hotel, we went out to find something to eat, trying not to get lost again. We pulled up to a fast food restaurant, not my first choice, but it was late and not much was open except fast food. Before I got out of the car, I asked the universe for a sign or something to let me know what was going on.  Why did this happen today? What was the purpose of  getting lost today?  Then, I thought… “aaaaah. Getting lost.” Was I getting lost spiritually? Was  my soul veering off  the road and did I need to be re-directed?

I have learned over the course of my spiritual journey to pay attention to signs. Our angels, loved ones on the other side and spirit guides communicate to us in various ways: butterflies, birds, dragonflies, coins and sequential number patterns, to name a few.  So, as I got out of the car and walked toward the restaurant, my eyes caught  a sign at the gas station next door to the parking lot. The sign I’d been looking for came in the form of  the price of a gallon of regular gas: $3.33.

Author of "Sweet Dreams" and "Last Night I Dreamt.... a Guide to Dreams and Dream Recall" Certified Dream Interpreter View all posts by Leslie Sheridan